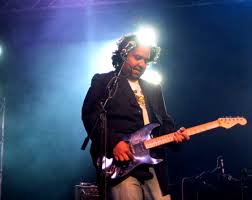 I am very pleased to have been asked to guest on a song with the mighty Black Strat Blues at Wammy bar on Thursday July 9th.

Black Strat Blues is the project of Indian guitar virtuoso Warren Mendonsa. Warren lived in New Zealand for a few years a while ago, this is when I made his aquaintence. He is now based in India again and is on a brief NZ visit.

Meeting Warren was a good lesson for me in the difference between a good guitar player and a great guitar player. Warren is an absolute master of his craft. His tones is immaculate as he makes his guitar sing. He has the ability to capture any audience’s attention with his playing finesse and technical skill. For anyone interested in guitar playing I’d recommend checking out his Auckland gig.

From the press release:

Hailed in India By Rolling Stone magazine as one of the country’s premiere guitar players, and having shared stages with such names asDerek Trucks, Rich Robinson and Bumblefoot ,Warren Mendonsa (Blackstratblues) returns to his second home New Zealand for one show only at Auckland’s Whammy Bar!

The Black Strat Blues NZ incarnation comprises Cole Goodley on drums and Jared Kahi on bass. I will join Black Strat on stage to perform one of my favourite guitar tracks – Jessica by The Allman Brothers.